Return on investment (ROI) can play a huge role in determining whether your organization opts for one enterprise print management solution over another. There’s a catch, though. Sometimes those predictions about ROI are rose-colored guesses that don’t necessarily correlate with real-world cost savings.

At PrinterLogic, instead of promising you a certain amount of ROI, we can simply point to actual case studies where our customers have already realized remarkable return on investment. Not by doing anything special—just through deploying our enterprise print management software in their print environment.

Take Laser Spine Institute (click here to read the full case study), a health care provider that aims to help alleviate chronic neck and back pain through minimally invasive spine surgery. Its specialty notwithstanding, in many respects the Laser Spine Institute bears strong similarities to other health care providers around the world. It has seven widely distributed locations: Cincinnati, Cleveland, Oklahoma City, Philadelphia, Scottsdale, St. Louis, and Tampa. It employs around 1,000 people. And in its effort to relieve thousands of patients each year from their chronic pain, the organization’s day-to-day operations have extremely high print demands.

Among several other attempted solutions, Laser Spine Institute’s IT team tried to implement printer policies and scripting to regain control of the 233 printers and four Windows print servers that comprised the enterprise print environment. Nothing worked.

Nothing, that is, until they deployed PrinterLogic.

Before long, the organization was able to eliminate all four of its Windows print servers—and with them the significant ongoing costs of maintenance, migration, and hardware upgrades. Earlier issues with printer driver compatibility, ports, manual printer installations, and driver updates all but vanished, thanks in large part to PrinterLogic’s powerful but intuitive centralized management. The time required for printer deployment dropped from an estimated 48 to 72 hours down to just one hour. That saved hundreds of man hours that were previously spent troubleshooting and creating workarounds.

Another former area of massive resource outlay had been in routine printer installs. For end users to do this themselves, they had to select the right printer from a huge master list. Then there were almost always unforeseen problems when they finally found the correct printer and tried to install it. That invariably led to a call to the service desk, which equated to time that both IT staff and employees were preoccupied and unproductive.

Once PrinterLogic was in use, service desk calls plummeted to “nearly zero” for routine installs. That’s because end users were able to click on an icon, visually select the nearest printer on a floor plan map, and install it instantly without any complicated additional steps.

Here’s the important part: The IT professionals at Laser Spine Institute have stated that
ROI has exceeded 200% since installing PrinterLogic. That’s not a hypothetical. That’s not a prediction. That’s actual, proven ROI in a common enterprise print environment. And there are even more potential cost savings to be realized through PrinterLogic’s built-in features like comprehensive auditing, central driver management, and more. 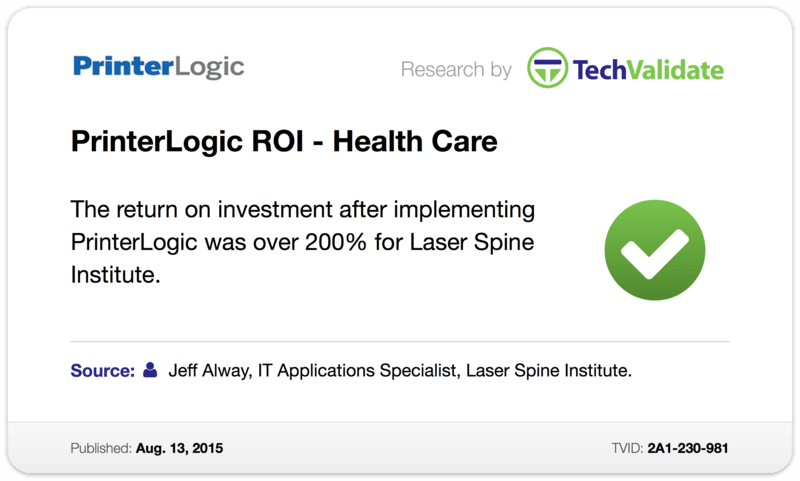