With all the disruptions in the world today, it’s easy to overlook important new developments in our SaaS platform. Last week, our Product Marketing Manager, Tom Darnall, interviewed two of our Systems Engineers, Ken Sivori and Kevin Merrill, to get a sense for what they’re hearing on the front lines with customers. Here’s the gist of that conversation:

Tom:  Several new features have been added to PrinterLogic SaaS recently. These include support for Okta and Azure AD, new printer-console applications (CPAs), simple badge release, and coming soon—offline secure release and the new Chrome OS extension. Let’s break it down and hear about your perspective on this new functionality.

Tom: We’ve posted a few blogs recently about how we now integrate with leading cloud-based Identity Providers. We know IT admins would like to wind down or skip over using Active Directory. Tell me about these newer IdPs and their significance to our customers.

Ken:  The “identity providers” you’re talking about are Okta and Azure AD. Having support for these services clears a logjam for our existing customers, and opens doors for new customers who practice a cloud-first strategy.

We have customers who wanted to use PrinterLogic SaaS, but chose our on-prem solution instead because they didn’t want to poke a hole in their firewall to allow LDAP authentication. Now, with Okta and Azure AD support, they have options for cloud-based identity management. So, we’re circling back with them to explore making the transition to a true SaaS solution now.

This is a great story, too, in our conversations with new prospects—particularly small and medium-sized businesses. Many of these guys grew up in a cloud world. For them, cloud-based identity providers are the norm. Chances are, they’re already using one. When they decide to check out PrinterLogic we have a compelling story.

Over the next few months, we’re adding two more services to the mix: Google’s Cloud ID and Ping Identity.

Tom: Secure-release printing is becoming more and more important. Last year, we made it more affordable by including licensing for pull printing and mobile printing in our SaaS platform at no additional charge. Tell me about the new Print Release App for smartphones and Simple Badge Release. After all, user convenience is a key part of security compliance.

Ken:  I am a huge fan of our Print Release App for iOS and Android devices. Almost everyone has a smartphone. The app is free and doesn’t require any setup by IT.  The user can install it themselves and just fill in their portal URL and AD credentials. Then when they need to release a print job, they just click the app, select their job, and release it.

Kevin: Yeah, even if the company’s Wi-Fi is segregated, they can still release their job this way because the app communicates with the cloud.  But some companies don’t want employees to rely on personal devices for tasks at work. That’s why I’m really excited to see Simple Badge Release make it into PrinterLogic SaaS!

Ken: While the mobile app gives you the ability to do secure release on any printer you manage—without extra hardware—many companies use badges, cards or FOBs for other types of access and want to use that same method to release print jobs. That’s where Simple Badge Release comes in.

It’s a similar concept in that it works with any network printer they manage, not just the large MFDs, and it’s super easy for the user. They just walk up to the printer and scan their badge on the card reader kit next to the printer.  Their print job gets released and printed to that printer.

Tom: I know you can set the mobile app to either release the last job, or all held jobs. Is there a preference out there?

Ken: I usually recommend they start with releasing all of their held jobs, but it’s up to them.  They can set this up differently for each device, so they have a lot of flexibility.

Tom:  What about companies that already have card readers on their MFDs? We’ve released a set of all-new control panel applications for our SaaS platform. That results in some important benefits for our SaaS customers.

Ken: Many companies are already using some form of vendor-specific secure release, or they may have a solution that relies on a print server or application server. This means they are either confined to a particular printer vendor, or they have to maintain servers in their printing environment.

Our new Version 2 CPAs for PrinterLogic SaaS can do away with both of these limitations.

First, our newest CPAs are based on a common code base across all printer-vendor platforms so the end-user experience is the same. Second, our solution doesn’t require a server in the customer’s environment. Because we use direct IP, print jobs are held on the user’s workstation, and when they’re released at the printer, the job goes directly to that printer. This is also a security benefit, because confidential print jobs stay local.

For administrators, what I like about our newer CPAs is they are much easier to install on printers. The previous versions could be a little fiddly to set up. There’s a big performance benefit, too, which is good for users because there’s less waiting. The new CPAs are up to ten times faster from the time the user swipes their badge until the job prints out.

Tom: What printer vendors are supported for the new SaaS-compatible CPAs?

Kevin: Our new CPAs are available for Canon, Sharp, Xerox, and HP printers now. Supported models are found here. This is a big share of the MFP installed base out there. Plus, we’re adding Konica-Minolta and Ricoh over the next few months.

Tom: You said that the print job is held on the workstation. What about users who walk away and their workstation or laptop goes to sleep? What happens when they try to retrieve their print job?

Kevin: That’s a good question. This can be a problem for some customers if the user’s workstation goes to sleep, or in the case of laptop users, if they close their lid or disconnect from the network. But we’ve got an answer for that: One of the newest features just around the corner is called Offline Secure Release. This gives administrators the ability to have print jobs also held on another computer running a special version of our client software. So, even if they power down their workstation, they can still print their held job. Once again, it’s all local. We don’t do a hairpin turn up and back to the cloud to achieve this.

Tom: I’d imagine the upcoming Chrome OS Client Extension is a big deal for customers who use a lot of Chromebooks.

Kevin: Absolutely! I work with a lot of education accounts, as well as state and local government. Many have Chromebooks (or other Chrome OS devices) in their environment. Until recently, PrinterLogic SaaS relied on Google Cloud Print as a vehicle to help Chromebook users print. It was part of our mobile printing feature.

But last November Google announced it’s doing away with Google Cloud Print at the end of 2020. We needed a different solution.

Our team is working on what we call the PrinterLogic Chrome OS Client Extension. This is a real game-changer because it allows IT admins to manage and deploy direct-IP print queues for Chromebooks the same way they do for Windows, Mac, or Linux workstations. This means a seamless IT experience across all operating systems.

Our Chrome OS Extension uses the industry standard IPP (Internet Printing Protocol), and it queries the printer on the fly to find out what features and capabilities that printer has (features like B&W printing options, duplex, etc.). It then presents those to the user so they can set up their print job the way they want. Perhaps the best news is there are no drivers to maintain. I can’t wait to see my existing customers and new customers start using this!

The only requirement is that the printer supports IPP, which is about 95% of the printers out there. During testing, we’ve seen that each printer manufacturer implements IPP a bit differently. We’re in testing phase now, and our engineers are working to overcome these inconsistencies. Once those issues are worked out, we will support all printer manufacturers.

The new Chrome OS Extension will be available in a few months.

Tom: That’s a great run-down, guys. Lots of new features now, and some very exciting stuff right around the corner. We’re sending out an e-mail to our customers very soon to explore this in more detail. 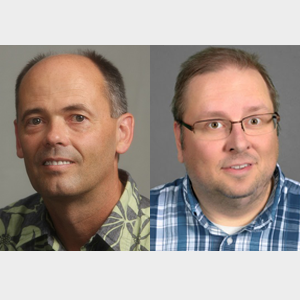 Ken Sivori : Before joining PrinterLogic as a pre-sales system engineer, Ken spent 20 years supporting and managing IT infrastructure for small businesses and startups in California’s Bay Area. He relocated to St. George, Utah for a lifestyle change and joined PrinterLogic for a new career challenge. He enjoys leveraging his experience on the other side of the sales equation as he helps companies recognize the value that PrinterLogic’s solutions offer. Kevin Merrill: Computers have been part of my life ever since our family first purchased a TI-99/4A and I wrote my first program. After spending 26 years in retail, I took the leap and returned to school to formally study IT. After graduating with a Capstone Certificate in Information Technology, and earning CompTIA A+, Network+, and Security+ certifications, I joined the PrinterLogic Team. Since then I have greatly enjoyed helping companies eliminate print servers.