Companies in the financial sector know a thing or two about return on investment (ROI). The very nature of their business is predicated on looking at several different options and figuring out where money is most likely to generate more money—for themselves as well as their customers.

So when it came time for a large-enterprise banking company to put its money toward a new print management solution, which solution do you think it chose?

The independent research firm TechValidate recently surveyed this company to see if its investment in PrinterLogic had been as successful as it had hoped. The resulting case study (TVID: AFD-A01-6BD) affirms that it definitely was.

This particular large-enterprise banking company had between 1,000 and 2,500 network printers in its environment. These devices were distributed across as many as 25 sites. To accommodate that arrangement, the company was using a minimum of 26 print servers to manage its print environment. But print servers, as we know, can be inefficient and costly. So this company began looking at PrinterLogic as a way to:

It took just five days for this large-enterprise banking company to fully install PrinterLogic across the entire organization. And it just kept getting better from there. The company completely recovered its investment in PrinterLogic within three months. The reason for that rapid ROI came down to the following:

Yet all those reductions amounted to much, much more savings over time. At the time of the TechValidate survey, this company had seen ROI of more than 300% after implementing PrinterLogic’s print management solution. It doesn’t take a financial whiz to know that’s the kind of return that would make any investor proud.

It makes sense, then, that this large-enterprise banking company would rate PrinterLogic enthusiastically. In terms of printer driver management, ease of deployment, speed of deployment and ease of use, it gave PrinterLogic an unqualified “amazing” across the board. When it came to printing security, PrinterLogic earned a “great.”

One company representative said, “Users are not afraid of printing any more”—all thanks to PrinterLogic. So ROI is one thing, but conquering users frustration and apprehension toward enterprise printing? You might say that’s priceless.

Contact us today for a free demo to see if we can help you reduce costs and increase efficiency in your printing environment. 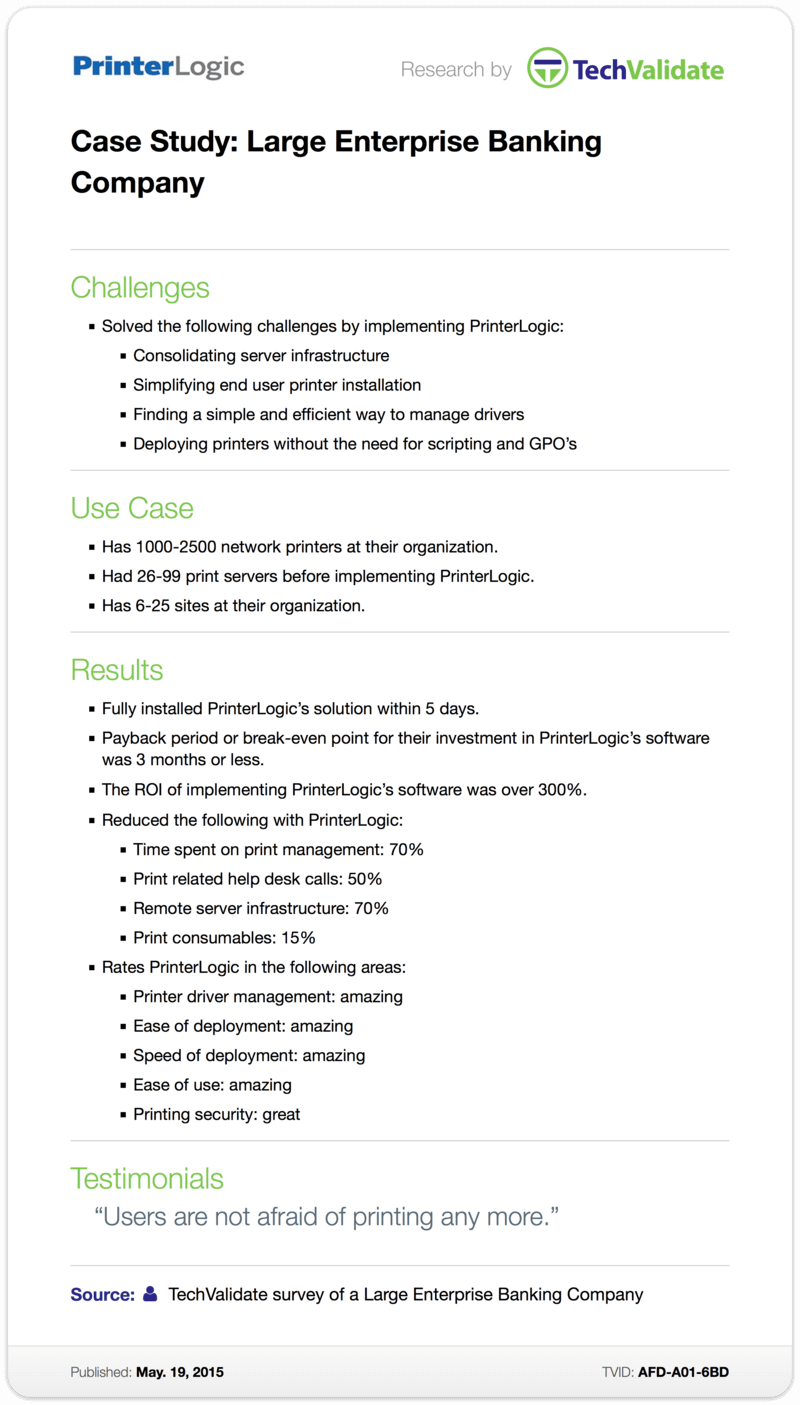